A new outdoor festival will be coming to Chelmsford, UK on Friday August 17th and Saturday August 18th. RiZE Festival will be taking place at the iconic Hylands park. What put this first year festival on our radar is that it is part of the many festivals included on Live Nation’s Festival Passport (for those that don’t know this is a pass that gives those holding access to over 100+ festivals in the US and abroad).  This also means that Live Nation is one of the major organizers of the event.

The inaugural year’s headliners are Liam Gallagher and Stereophonics. The line up also includes James Bay, Years & Years, Plan B, Rag’n’Bone Man, Dave, Rita Ora, and many more. The line up is an eclectic mix of both UK natives and international sensations. From up and coming names to Grammy Award winners, this first year festival is sprinkling a little bit of every flavor in. 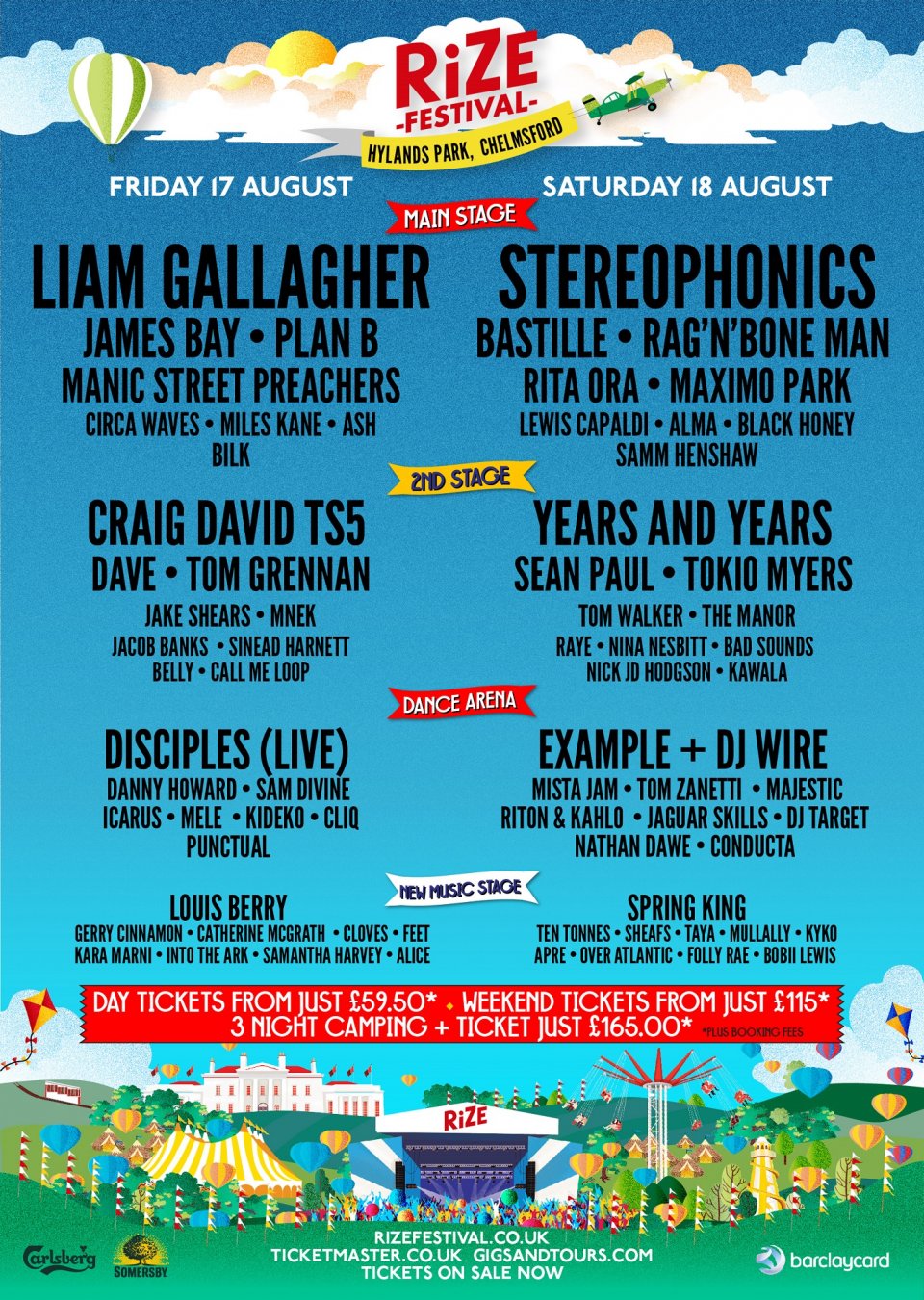 This will be my first venture over the pond. While I am excited, I have to admit that I am not completely familiar with most of the line up (especially the two headliners) but here are 5 acts that I am beyond excited for and will not be missing.

The British indie pop band originally started off as a solo project featuring just lead singer Dan Smith. The name originates from his birthday, July 14th, which is also Bastille Day. It later expanded to include keyboardist Kyle Simmons, bassist and guitarist Will Farquarson, and drummer Chris Wood. They released their debut album Bad Blood in March of 2013 and rumor has it that they are due for a new album to be released this summer.

Inspired after hearing Eric Clapton’s Layla, James Bay has been playing guitar since he was 11 years old. When a fan uploaded a video of him on YouTube at an open mic in London, things really started to take off for Bay. Within a week he was signed to Republic Records.. Within a week he was signed to the Republic Records.  His top songs, “Hold Back the River” and “Let It Go” have peaked at number 2 and 10 respectively on the UK charts. Just last year he released a fashion collection with Topman.

Rita Ora was born in Yugoslavia but her family relocated to London in 1991 for political reasons. The singer rose to fame when she was featured on DJ Fresh’s UK chart topping single, Hot Right Now, in 2012. After that she had two singles, R.I.P. and How We Do (Party), from her debut album, Ora, reach number one on the UK charts. Since then she has been gaining popularity all around the globe.

The Jamaican dance hall rapper and Grammy award winner started off as a national water polo team player until age the age of 21. It was then that he quit in order to pursue music. Since then he has produced six studio albums and many chart topping tracks.

The South London trio consisting of Nathan Vincent Duvall, Gavin Koolmon, and Luke McDermott released their debut EP, Remedy, in 2013. They gained international attention for their hit, How Deep is Your Love, with Calvin Harris in 2015. This year they have been touring a live show featuring a full band and vocals from Duvall.

The festival will take place at Hylands Park in Chelmsford, UK August 17th and 18th. Tickets and more information can be found here.